Rovuma: the only large river of northern Mozambique?

The Rovuma River lays at the border between Tanzania and Mozambique and forms a large delta. There are gaps and inconsistencies in the geology maps of the border areas, making the drainage reconstruction more challenging. While attention has been fixed on the offshore Rovuma Basin, not much has been published on the drainage development in the hinterland. The Rovuma River as it is today is greatly influenced by Malawi rift tectonics, Quaternary incipient grabens, and reactivation of Karoo basin and Precambrian basement structures.

The Rovuma Basin offshore also received a considerable amount of sediment from the adjacent rivers. While these are smaller today, they had a large impact and volumetric calculations lead to the recognition of progradational sequences. Moreover, tectonic and magmatic activity in northern Mozambique not only affected the sediment flux but also the mineralogy of some rivers of northern Mozambique. Last but not least, Late Cenozoic uplift of more than 1 km severely altered the distribution of drainage lines.

What else will you learn about the Rovuma River? 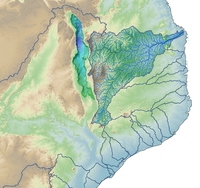 Go to the other Highlights.