Fluctuating sediment fluxes during the palaeodrainage evolution of the Limpopo show a time of extremely high sediment flux, in which two peak episodes are recognized and can be associated with strong progradational phases in the palaeo-Limpopo megadelta. 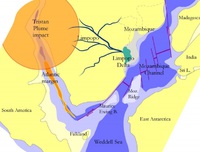 The Limpopo River is one of the most important rivers of southern Africa, and more so in its geological past. It has been covered extensively in literature how the Limpopo was once an enormous drainage system, covering the interior of southern Africa, a drainage basin that was larger than that of the Zambezi today. This study reveals how the Limpopo formed after the Karoo LIP eruption. The geomorphologic analysis, together with the geodynamic evolution shows a couple of differences to the publically acknowledged history, which appears to be undisputed. Furthermore, we give a detailed Cenozoic evolution, highlighting several Quaternary changes.

While the Limpopo was very large in the past, its sediment flux was not continuously high, and that is partly a consequence of fluctuating climate regimes but tectonics seem to have a dominant control as well. Intracontinental disturbances, generated by far-field stresses, create topographic obstacles that cannot be overcome by rivers. Contrarily, it can also create more slope and as such push the river profile out of equilibrium, by which it starts to erode and expand, and to produce more sediment. Yet, there was a time of extremely high sediment flux, with two main peak flux moments, that are associated with deltaic progradation and which are now buried in the ancient Limpopo megadelta, which is located deeply beneath the Southern Mozambique plains.

Go check what we have on the Zambezi and the Rovuma rivers. Or visit the other Highlights of our Southeast Africa source to sink and Palaeodrainage studies.